In February sometime I started having wrist pain.  On the inside of the wrist right below the thumb, I would have sharp pain with certain movements.  It especially hurt to hold my phone or tablet.  That caused a big issue since I draw on my tablet and I had a pet portrait I was working on.  Luckily the portrait is for a friend who is also chronically ill, so she understands these things.

While at Urgent Care for another matter, a suspected UTI, I had the doctor take a look at my wrist and she said I had tendinitis and needed to rest it and it should be fine in a couple of weeks.  I put it in a brace and waited.  The pain and swelling got worse.  After about 3 weeks, I went to see my primary care doctor.  She took x-rays and they didn’t show anything.  She referred me to a Hand Clinic.  Of course, it took a couple of weeks to get in there and during that time, the pain got worse.  The brace was not helping.  The brace stopped me from flexing my wrist up and down, but not side to side, and that’s what was causing the most pain.

While I waited I kept doing research to try to figure out what was wrong.  If you search for wrist pain, you will find carpel tunnel, and not much else., and I did not have the symptoms of carpel tunnel.  You really have to dig to find other causes.  Finally I found something that fit my symptoms – De Quervain’s tenosynovitis.  There was even a simple little test to diagnosis it.

The Finkelstein test is performed by placing your thumb against your hand, making a fist with your fingers closed over your thumb, and then bending your wrist toward your little finger.  If you have severe pain, you probably have De Quervain’s tenosynovits.

De Quervain’s tenosynovitis is inflammation of tendons on the side of the wrist at the base of the thumb. (see image left)  So yes, a type of tendinitis, but not one that will get better with a brace.

Last week I saw the hand specialist and he confirmed my suspicions.  I have DQ.  He even drew a little picture explaining it.  He told me the brace was useless, to just get rid of it. (freedom!) He said that a steroid injection in the affected area cures the condition 80% of the time, some people need a second injection, and very rarely it requires surgery to open the tunnel and make more room for the tendons. 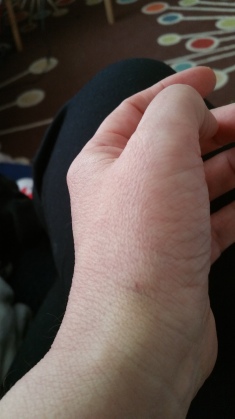 So I got a shot.  He tried to be gentle but, Oh boy did that hurt!  He said I should feel some relief immediately because the shot has some numbing medication, and I would feel lasting relief in a day or two.  If the pain comes back after a couple of months, I’ll need another injection.  If it comes back after that, then I’ll need surgery.

I didn’t really feel the immediate relief he spoke of, but the next day it was like a light switch cut off.  The pain was almost completely gone.  By day two, I barely felt pain at all.  Now, I’m still barely feeling any pain, every once in a while I’ll get a twinge, but that’s all.  I’m amazed!  After 2 months of intense pain, I had one shot and it’s gone!  Wow, if only everything I had could be cured so easily.  Yes, I know the pain could come back, but I’m taking this as a win!

What causes this?  They aren’t exactly sure.  It can be from repetitive motion using the wrist, like picking up a baby (I can’t tell you the last time I picked up a baby).  It is often seen in new mothers and middle aged women.  It could be caused by hormonal fluctuations, or other conditions like arthritis.  Anything that causes swelling really.  I’m thinking mine was caused by the way I was holding my tablet while drawing, it put a lot of pressure on my thumb and bent my wrist.  I’ve since gotten a new computer and I don’t hold it like I was holding my tablet, so I’m hoping I don’t have a repeat of this.

Last night I was even able to finish my latest pet portrait.

What do you think?

* painting by W. Holcombe.  All rights reserved.  Do not use without permission.

Leave a Reply to I tripped over a stone. Cancel reply