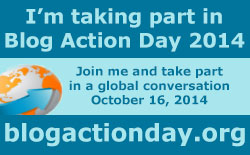 I admit I had not heard of Blog Action Day until yesterday.  I left a comment on fellow blogger Kitt O’Malley’s blog and she told me that it was worthy of a post for this year’s theme Inequality.  Kitt is an amazing mental health advocate, please go and check out her blog.  Kitt O’Malley – Living with Bipolar. Loved by God.

Sometimes you need help.  You may or may not want it.  You are a risk to yourself or others.  A stay in a psychiatric facility is needed.  The care you receive will vary drastically depending on your financial means.

This is my story…..a 30 something white woman, with not the best insurance, with no savings, and no other financial support….

I was involuntarily committed to a psychiatric facility, I was suicidal. I had called a Suicide Help Line and was talked into coming in to a mental health facility to “talk”.  They wouldn’t let me leave.   I was taken from there to the psychiatric hospital in the back of a police car.  It was scary.  Really I wanted to be committed, I was afraid of what might happen, but officially it was involuntary. My insurance would only pay for inpatient treatment if it was listed as involuntary. However, once I got in, I wasn’t told my rights.

I wasn’t treated badly. I actually had a good stay for the most part. There were no windows my room.  The view from my window in the main room was through a thick metal screen, it was more like a prison. But it was a nice atmosphere for the most part, and it was clean and the people were good and they had really good food!!  It was surprising to me how much the patients were supportive of each other.  There were times when you would hear screaming and there were times when everyone was rushed into their rooms and closed in….but for the most part, it was a quiet and restful stay.  This hospital had separate wards depending on the seriousness of the illnesses.  This is not always the case.

My biggest problem was the psychiatrist they made me see. He made me very uncomfortable. I was a rape victim and he gave me the creeps. He insisted on being in the room alone with me. I complained and complained and I couldn’t get this resolved. He said I had Borderline Personality Disorder and my complaints were part of my disorder.  (I had already been diagnosed as being Bipolar.  This diagnosis was again confirmed by a different psychiatrist.)

This stay ended up making me almost declare bankruptcy. did it help me mentally? Yes. Mainly because it got me in the system and I was able to continue treatment.

I did end up not having to pay for the psychiatrist outrageous bill he tried to saddle me with because of the complaints I had made against him and the many request to have him removed from my case. I also had most of the bill from the hospital dropped because they didn’t get it authorized, and since I was involuntarily committed I couldn’t be held legally obligated to the papers I signed when I was admitted. I wasn’t of “sound mind”.

However, I lost my job. I couldn’t pay my bills when I got out. I was single and alone. My roommate stole from me when I was in the hospital.  I had no one to help me.  If I hadn’t been so determined to get better, and stay the course, I would easily have stopped taking my medications….I had a hard time affording them. I would have stopped going to therapy and to a psych doc….again it was very had to pay for it.  However, I wanted to be more normal.  A lot of Bipolar people really miss the highs…I did.  I’m an artist, and I will say, I feel I creating has been a lot harder than it was before. But I will not jeopardize my health.

These are trials I had and I was really there because I wanted to be. I didn’t have an advocate. I wish I had. There were a lot of things going on with my case that no one told me about.
If I had not been so eager to want to get better, I don’t know if I could have done it.
The system is so very far from perfect!
I worked so hard. I still work hard at it.
many people who are involuntarily committed won’t be committed to working at it.

Many people who need help and want it won’t even be able to get in a hospital because they don’t have the funds.

No one should feel they have to declare bankruptcy because they need help with their mental health.  My credit was ruined for years after this hospital stay.  I was afraid to answer the phone because of bill collectors.  Yes, I was able to finally get the bills straight with the hospital, but it put me in such financial straits with everything else it followed me for years.   My employer didn’t hold my job for me.  So when I got out of the hospital, I had no job, and a whole lot of bills.  I was still in a very fragile state of mind.  This is not the ideal way to enter back in society after leaving a psychiatric facility.

Can you see the Inequality in the Mental Health Care system?

Can you see how different it would have been for me if I had the financial means to pay for a higher quality facility, and have an advocate help me?

Can you see how different it would have been for me if I had not had the financial means I had?  If I hadn’t had insurance?  I easily could have either have been ignored, or put in a state hospital.  I could have been put in a ward with people who were very dangerous.  I could have gotten lost in the system.  These kind of things happen every day.

What can we do to stop the Inequality in the Mental Health Care System?

The first thing we can do is talk about it.

The more attention we call to it….the more noise we make about it…they will have to do something about it!

But I do know this is an inequality that must end!  People cannot continue to suffer because they can’t afford mental health care.